Amuse Artjam 2007 is a twice annual exhibition showcasing new Japanese art talent. The two exhibitions a year alternate between Tokyo and Kyoto. The main sponsor of the exhibition series is Amuse, a Japanese entertainment company, while many other corporations form the creative arts industry sponsor the exhibitions and award large cash prizes. This was my first exhibition opportunity during my Fulbright Grant in Japan.

In my proposal for the exhibit I laid out plans to perform Big Blob, a large inflatable suit performance that I fabricated in Nagoya. Initially the event organizers were excited about this piece and looked forward to the performance. As preparation talks progressed the organizers began to inquire about other work in my portfolio. Apparently they could not receive permission for an outdoor performance at the Kyoto Museum and because of the limited space inside the Museum and the large size of my piece I could not perform Big Blob for this exhibition. 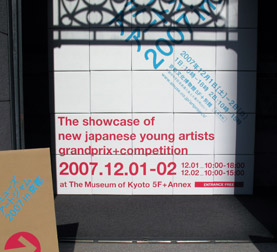 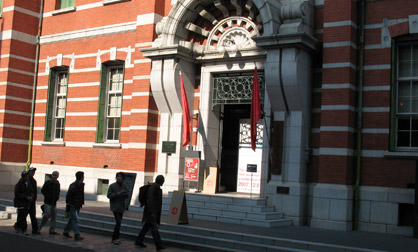 Amuse Artjam 2007 at the Kyoto Museum

The curators asked if I had another piece to exhibit. I told them that I had recently arrived in Japan and had not produced other work but could make a new piece by the opening. After establishing how much space I could use I set to work making an interactive inflatable sculpture that I titled Bubble Head. The sculpture is made of PVC coated polyester fabric, which I sewed together using an industrial sewing machine. The sculpture inflated with continuous air flow from an industrial blower.

Bubble Head measured almost five meters tall and two meters by two meters at the base. Two zippered portals allowed viewers to insert their heads into the positive air pressure inside the sculpture. A large opening on the bottom of the piece allows a person to enter.

Inside the piece ropes connect various points along the seams to provide tension and the control the outside contours of the sculpture. The person inside may also pull and yank on the ropes. This performance art component made the sculpture come alive with movement. 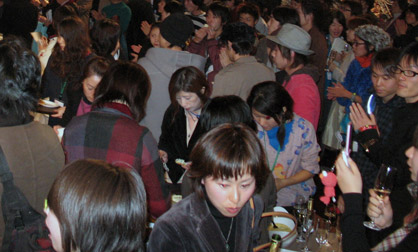 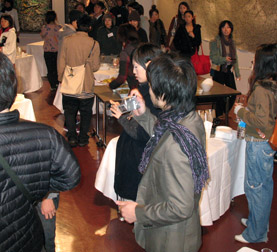 From the same PVC fabric I tailored a suit to wear for the opening and during the performance. Suits are part of my performance and sculpture work.

During the exhibition and opening I spent a lot of time inside the sculpture moving various ropes to make the outside of the inflatable move. Because of the semi transparent nature of the PVC fabric I could tell when someone was walking by the sculpture and then I could pull the appropriate rope to interact with them. While in Bubble Head I used my presence as a performer to enhance the experience of the patrons of the museum. During that time various people took my place inside the sculpture to make it a truly interactive experience. 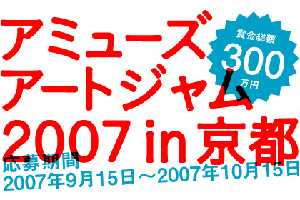