George Zupp had a dream to serve a nacho cheese volcano as gallery munchies at an opening. I told him that if we ever had a show together then we would make a nacho cheese volcano. George Zupp, Jar Schepers and I proposed a sculpture show at the UTSA Satellite Space in San Antonio, Texas. For the closing reception we erupted the Nacho Volcano. The concept evolved over time. George had visions of a pineapple village and jalapeño natives and I had visions of high velocity cheese.

A few months before the exhibit, George and I were discussing the logistics of the plan at a party. A man next to me asked, "Do you know who I am?" To which I replied, "No." "I'm Rick Liberto of Ricco's Nacho Cheese." Rick offered to provide all the gooey nacho cheese that we would need and thought the idea was hilarious. 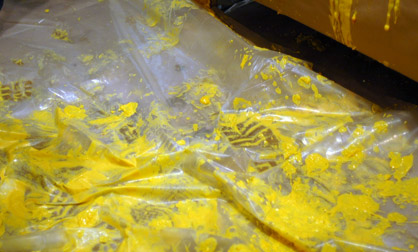 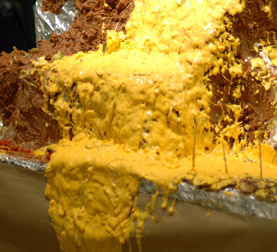 After acquiring a sponsor I set about fabricating the mechanism that would hurtle two gallons of nacho cheese into the air from a refried bean mountain. The final volcano had two levers that activated two gallons of cheese each. It took 16 cans of #10 Aged Chedder Condensed cheese donated by Ricos Nacho Cheese to fuel the explosion. Mixing the cheese made one regret ever eating nachos at the ballpark or any 7-11.

During the closing reception gallery guests got their fill of cheese and witnessed jalapeño virgin sacrifices to appease the volcano gods to no avail. After one such attempt small seismic rumblings sent cheese splattering all over the floor. Shortly thereafter the countdown for the main eruption began. 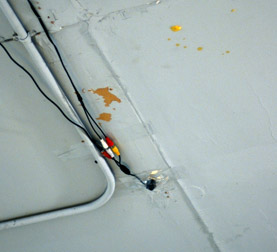 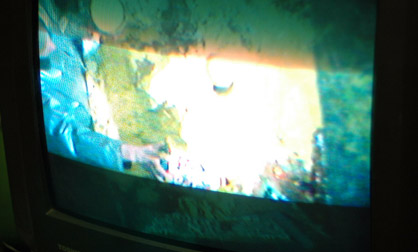 Nicely dressed gallery guests seemed to ignore the fact that things that go up eventually come down. The cheese his the pineapple village and refried bean mountain and splattered toward the crowd like a cheese cluster bomb. Ken Little used the sun shield from his truck to deflect the devestating cheese.

The local FOX News station covered one of the multiple eruptions throughout the evening. I set up a sky camera on the ceiling above the cheese craters. In the videos below, witness the awesome destructive power of Ricos Nacho Cheese as it spews out of the volcano for a spicy seismic event.