The bike project traveled up to the northwest. Gallery 76 at Wenatchee Valley College sponsored the show "Don't Just Stand There." Because of the expensive shipping costs that the gallery generously picked up, only three bikes made the journey. Those included the now infamous FUCK Bike, the Invisible Bike, and a rare glimpse of the Chair Bike from my time in Japan. A picture of Mimi Kato riding the Chair Bike with some Japanese school kids in a park in Japan, adorned the cover of the invite. The card is humorous because one boy is picking his butt.

I spent most of my time working in the gallery on an experimental inflatable project. I originally planned to make a large inflatable hat but decided to make a big inflatable '76' in tribute to Gallery 76. This proved to be a learning process. First, I tried gluing the seams with contact cement to no avail and settled on using a household iron that I bought at the Salvation Army to melt the two layers of vinyl together. That shopping trip gave me the first opportunity to ride the Chair Bike around town to run some errands. Throughout the week my time riding the bikes around town skirting traffic increased in order to raise publicity for the opening. 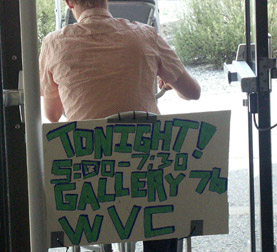 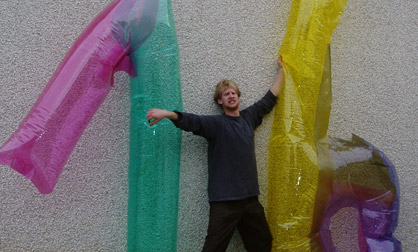 Students came and went throughout the day and many teachers brought their classes to the gallery to talk with me about the show. I took this opportunity to show the students that not everything in a gallery is 'precious' and allowed daring individuals to take any of the bikes out for a spin.

At the opening a student attempting to ride the FUCK Bike sped out of the gallery with glee. We thought all was well until a loud bang rang out. He lost control and toppled over a pile of chairs in the hall. The bike suffered a few scratches. I told him that the pieces were meant to be used. 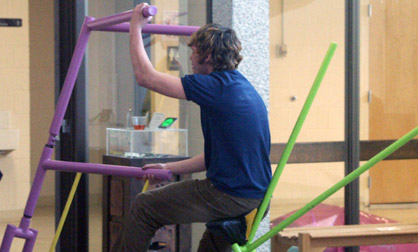 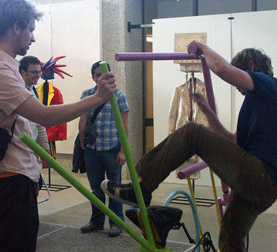 Camera phones changed the way many students interacted with the show. Many students took pictures of a certain bike and could not stop laughing in anticipation of showing their friends. This 'anytime' documentation also occurred during my performance rides around Wenatchee. Motorists stopped ahead of me and tried to secretly take pictures.

Adults and children alike attended the opening and got a kick out of the bikes and suits. The Invisible Bike is always a hit and made quite and impressionon a young patron. His feet could not reach the pedals and it was a great feat of balance on his part to stay on the bike for a picture but his smile sums up one of the big goals of this work... Smile.