Peek-a-Boo: Who's Watching Who?

James LeFlore of the City of San Antonio's Design Enhancement Department invited me to do an installation at the San Antonio International Airport. I received a small honorarium for supplies and had almost complete freedom in content. The art exhibition space at the airport was a terrible situation of recessed alcoves, covered with carpet with glass fronts. Any art presented in this environment would fall a few notches down the aesthetic ladder. To avoid this I designed a site specific installation that sought to negate display case nature of the space. 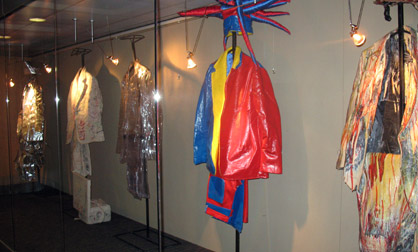 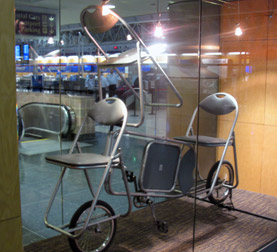 I decided to push the image right up to the glass to make the installation appear to be part of the architecture rather than something planted in a display area. I used corrugated plastic and six foot tall vinyl letters to compete with the grand scale of an airport terminal. The installation was visible from the ticket counters affording guests waiting to pass through the security checkpoint plenty of time to observe the installation.

In Terminal 1 a series of close circuit TV cameras and monitors created a hyper aware space. Questions about what was real emerged. The images were not recorded. The only way to experience them was in real time. At a single instant, viewers could have their image displayed on multiple monitors while viewing others' on different monitors. This created a bewildering environment and a scramble in search of which camera fed which TV. People are recorded everyday by cameras without second thought, but now that they confronted their own interlaced image they took notice.

During installation a police officer approached me to ask what I was doing. He said that it reminded him of "Big Brother." I wanted to remind him that he was in the employment of "Big Brother." 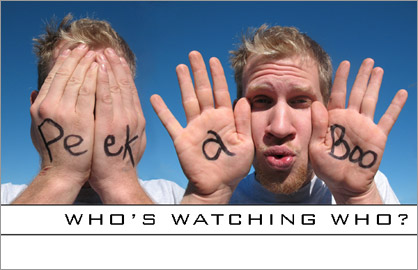