Each year the Aichi Prefectural University of Fine Arts and Music hosts an exhibition in their main gallery featuring the work of foreign exchange students and research fellows. Most exchange students come from Asian countries rather than from Western countries although sometimes artists come from Western countries for short term visiting artist residencies and visiting teaching positions. My work was included in this exhibition since I was a visiting fellow on a Fulbright Research Grant. This exhibit occurred within the first three months of my research project after I had completed two new works. 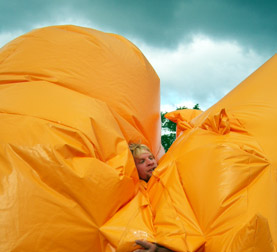 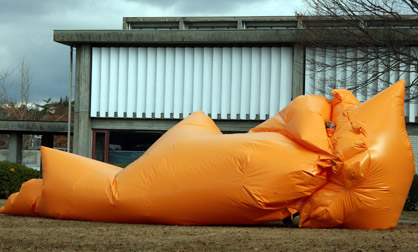 The gallery is a two story building featuring a large atrium exhibition space and an outdoor sculpture garden. The inflatable suit titled, Big Blob, measured almost three meters tall and six meters long. Because of its large size I installed it in the spacious atrium section of the gallery with concrete walls. The bright orange PVC coated polyester fabric contrasted well with the gray concrete. The sculpture remained inflated because of a continuous internal fan.

The second piece in the exhibition titled, Bubble Head, I first exhibited at Amuse Artjam in Kyoto 2007. At the University I exhibited it outside in the sculpture garden. Large windows in the the front of the gallery allowed patrons to see the sculpture before going to the garden. Bubble Head has two zippered openings for viewers to put their heads inside. The experience inside is more intimate but the continuous rush of air spewing from the openings can be overwhelming. 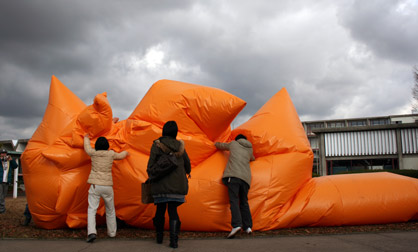 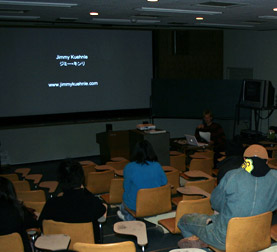 In addition to the exhibition I planned a performance of Big Blob outside in a courtyard on the last day of the exhibition. Big Blob is an inflatable suit meant to be worn. A battery powered fan keeps the suit inflated while the performer can bounce, jump, run and tumble at will. I suited up in the suit and charged as the people outside and lumbered around like a large leviathan. After the performance many people tried to put the suit on but had great difficulty walking.

Later in the evening on the day of the performance I gave an artist talk. I had been at the University for almost three months as a Fulbright Scholar without an introductory lecture explaining my work and process. I did not know about the lecture until the beginning of the exhibition and therefore did not have a lot of time to prepare. I planned to give the lecture in Japanese and the outcome was better than I feared for my first formal lecture in Japanese.