Fumiko Nakamura invited me to do a performance at the Aichi Prefectural Museum of art in downtown Nagoya. After meeting with her to discuss locations we decided to use the inflatable suit, Big Red, to tour the streets of Nagoya while installing a temporary inflatable in the museum. The piece in the museum is titled, Air to Air Communication and is a cold-air inflatable installation made from yellow taffeta nylon.

Five three-meter tall translucent yellow structures connected by long cylinders confronted the visitor upon exiting the escalator to the tenth floor. The structures dwarfed people standing next to them and occupied the outer atrium. Viewers walked along the stretch of yellow pods and children tried in vain to jump up to the connecting tubes above their heads.

The outdoor performance began at the second floor of the museum, which exited out to the large Central Park that runs north-south through Nagoya. I inflated the suit and began to ram into the large glass windows of the museum to the astonishment of theatre patrons waiting in line. The journey began through the busy streets and sidewalks filled with tourists, office workers, and many bicycles.

Big Red gets in the way wherever it is. In Nagoya it smashed into trees, blocked sidewalks and interceptions, plowed into rows of parked bicycles, bewildered pedestrians and put a smile on many faces. The trek followed a winding route south towards the Nagoya City Art Museum. Staff from the Aichi Museum and volunteers followed me to document the performance with video and pictures. Here everyone took a much-needed brake. This also allowed the intermittent live feed being broadcast back to the lobby of the museum to search out a wireless Internet connection. 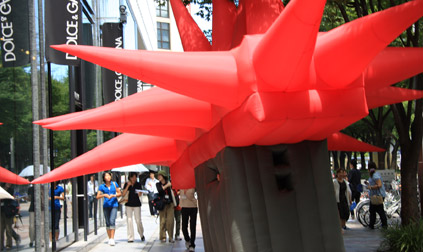 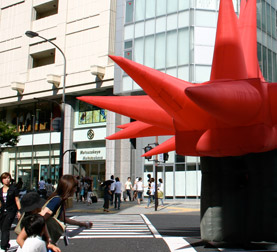 After lunch I donned Big Red to careen through Oosu, an electronics district in Nagoya. The streets in this district made travel difficult. I made my way back to the Aichi Museum crashing into many of the upscale department store entrances in the Sakae shopping district.

I packed up the inflatable suit with the help of museum staff and one of the curator's children. The group met later in the evening to celebrate at a local izakaiya, or bar. Big Red made its debut at galerie weissraum in Kyoto. Later that summer it went to the streets of Laredo, Texas via the Laredo Center for the Arts. I also used the suit in numerous informal performances at locations ranging from Osaka, Japan to Grand Rapids, Michigan. 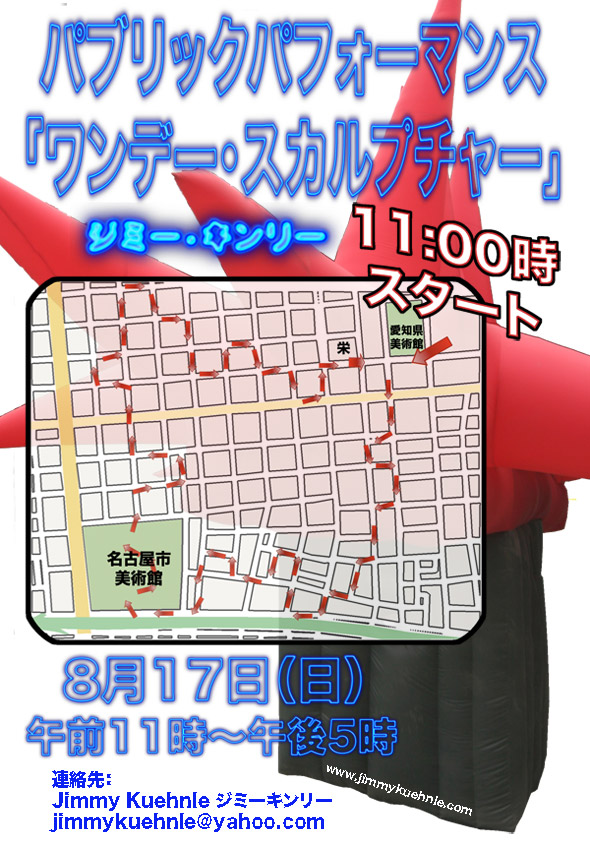