Jimmy Kuehnle: Art in the Streets

I returned to Houston after exhibiting at the Project Row Houses with The Bike That Draws for my 1st performance ride in Houston. I invited pedestrians to create their own artwork with a drawing machine on wheels as I careened down Main Street.

Wearing a hand-made canvas suit, on which the public could draw anything they desired, I instructed willing participants how to pedal the overly gear laden contraption to a noisy, clanky, erratic, dangerous, art making conclusion. With this bicycle I had previously traversed over 20 miles across San Antonio bringing terror and delight to motorists passing by. 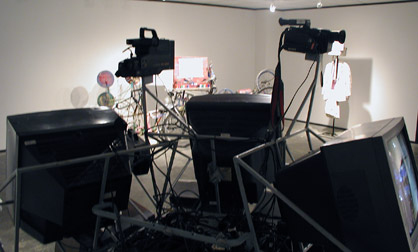 Similar to a nine month performance series in San Antonio, I stopped at local cultural institutions along the way to allow them to join as well. Stops included the Project Row Houses, the Inman Gallery, Finesilver, the Lawndale Art Center, the Museum of Fine Arts Houston, the Contemporary Art Museum, and Rice University. But the most important stops were the strip mall parking lots and gas stations along the way where anyone with a bit of gumption could create their own 2D masterpiece, with some mechanical assistance of course.

Andy Cerota of ABC 13 Studios in Houston came out during the performance ride to do a live report for the 4:00 segment of "your Hometown LIVE." His news team met me at Rice University to do a live feed. After the first live feed they ran tape that was cut earlier. The shot went back to live and Andy Cerota was frantically pedaling the Bike That Draws. By using television media my artwork and message could reach a much wider audience that the gallery going art crowd.

ABC News coverage of the Bike That Draws